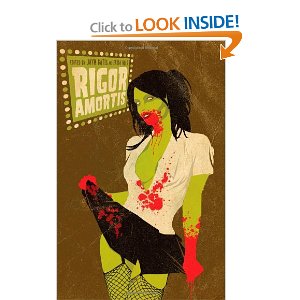 This week’s double-length show features a dozen writers who work in various genres. We have poetry, excerpts from novels, short stories and a non-fiction essay for your enjoyment.

The iTunes Link can be found HERE.

The Direct RSS Feed is HERE.

A quick show note from episode two of The Word Count.  JAYM GATES and ERIKA HOLT’S anthology, RIGOR AMORTIS has now been released and is available for purchase at AMAZON.

ROBERT JAMES RUSSELL – Robert James Russell co-founded the indie comic book publisher Saint James Comics in 2009 (www.WhoisSaintJames.com). He is a member of Year Zero Writers, and has had work featured by Like Birds Lit, Greatest Lakes Review, The Legendary, and is currently working on his debut novel, excerpts of which appear on his website (www.robertjamesrussell.com). He recently edited his first anthology, entitled Sex Scene: An Anthology, which is available as a free download. Robert lives in Ann Arbor, Michigan.

DIANE NELSON – After a thirty year career as an analytical chemist and technical writer, Diane Nelson turned to writing fiction full time.  Her first novel, Dragon Academy, was released in June 2010, followed by Dancing in the Dark which she edited and contributed a short story, Dance Macabre, and Mounted Exercises in July 2010.  She edited another anthology, Flashes Through Time, out now in eBook format and slated for print release Fall 2010.  Diane also writes as Nya Rawlyns.  Her novella, Sculpting David, will appear under the Red Sage imprint.  Shadow of This World, written in collaboration with Denyse Bridger, Chris Ledbetter and Joann Hamann-Buchanan, will be released by XoXo Publishing.

JEFF SINCLAIR & KIM JEWELL – Jeff Sinclair has been writing dark fiction since his encounter with a dark force as a boy. His first novel, No Heaven, will be published in the Kindle store this fall. His current obsessions include post-apocalyptic theories, geography, and botany. Find him on Twitter as @undeniablyjeff and his blog at darkimaginarium.wordpress.com  Kim Jewell is a marketing executive and has worked in advertising, marketing and public relations for more than fifteen years – both at the corporate level and also in the agency arena.  She is currently the Director of Development for a regional law firm in Evansville, Indiana where she manages the business development and marketing campaigns. She writes YA fiction.
Twitter:  JEFF- @undeniablyjeff  KIM- @kimjewell
Web:  JEFF- http://darkimaginarium.wordpress.com/  KIM – http://www.kimjewell.wordpress.com

MERCEDES M. YARDLEY – Mercedes M. Yardley wears red lipstick and poisonous flowers in her hair.  She had been published in  The Pedestal Magazine ,A Cup of Comfort for Parents of Children with Special Needs, John Skipp’s Werewolves and Shape Shifters: Encounters With the Beast Within, and the upcoming  Hint Fiction anthology.  She works for Shock Totem magazine and is represented by Jason Yarn of Paradigm.

TL TYSON – T.L Tyson is a non-drinking, non-smoking, vegan from Canada. Her hermit-like existence allows her to delve into her writing without worrying about someone knocking at her door. Sleep is a rarity for her and she spends the night hours conjuring up new characters and thickening plots. She is constantly being lead in new directions by demanding personas and quirky ideas. Her writings cover a broad range of themes and genres, from YA urban fantasy to sea-faring historical fiction. If you catch her without her laptop, you may find her curled up reading a book or expanding her music knowledge.

MATTHEW MUNSON – Matthew wrote his first work of fiction at the age of 9 – a full 8 pages in length (with pictures) – and is currently languishing somewhere in his parents’ loft. He sincerely hopes the rest of his work doesn’t go the same way. He lives in the south-east of England and is searching for a publisher for his first, full-length novel, Fall From Grace, as well as writing his second one, currently untitled. He hasn’t got much time for anything else, as he feels like he is trying to live three lives already.

AARON POLSON – Aaron Polson currently lives in Lawrence, Kansas with his wife, two sons, and a tattooed rabbit.  To pay the bills, Aaron attempts to teach high school students the difference between irony and coincidence.  His stories have featured magic goldfish, monstrous beetles, and a book of lullabies for baby vampires.  Several new stories are forthcoming in Shimmer, Shock Totem, and Space and Time, and other publications.  The Saints are Dead, a collection of weird fiction, magical realism, and the kitchen sink, is due from Aqueous Press in 2011.

PENELOPE FLETCHER – In her own words: I want to write something worth remembering. I have a suspicion it will take most of my life, but I’m okay with that. I write fantasy, which to date has fallen into the young adult readership. I listen more than I speak, and skip from one thought to the other quite fast. My writing reflects this and given me a style, but at some point I know someone is going to get mad about it. I love to smile, and my favorite thing to do in the whole world is to read.

MARK SOUZA –  Mark Souza lives in a small town in Western Washington with his wife and two children. His horror short stories can be found online at Amazon and Pill Hill Press. He is currently working on a novel.

MONICA MARIER – Monica Marier is a caffeinated stay-at-home mom, artist, writer, composer and eccentric. Her debut novel Must Love Dragons is coming out through Hunt Press September 2010. She writes a column on obesity in America for Frum Forum (http://www.frumforum.com/)  and draws/writes webcomics for the company she co-created: Tangent Artists (http://www.tangentartists.com/) . Monica lives in the D.C. Metro area with her very supportive husband.

SESSHA BATTO – Sessha turned to writing full time two years ago after a twenty year stint in video production editing, scripting and creating motion graphics.  Her first novel Strength of Will was released in November 2009.  Her short story Wintersong is included in Dancing in the Dark: An Anthology of Erotica. Her latest offering, Shinobi, is currently out on query. More information and sample chapters can be found on her website.

CHRISTOPHER BLANCHARD – He’s a 36 year old husband and father from San Diego who has decided to really get serious about becoming a published author. My blog is an attempt to further my skills in my chosen craft.