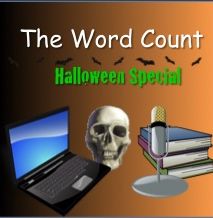 Welcome ghouls and ghosts to episode 4 of The Word Count Podcast!

This week’s entry is my first Halloween special featuring shorts and even a song that will scare the pants off of you.

And if the pants DO come off do NOT send me pictures this time! 🙂

Links to the show are off to the left.  Enjoy!

And keep the lights on.

Emmett is a guy from Sydney who spends every free second that he’s not at work writing stories. It was Angel turning evil on Buffy that did it. That was the moment that the fanfiction started and the need to create stories became a compulsion rather than a hobby. Ten years of honing his craft yielded the first story that was actually worth the time and effort and constant swearing – Old Haunts: A London City Novel. He hopes you’ll read it.

After a thirty year career as an analytical chemist and technical writer, Diane Nelson turned to writing fiction full time.  Her first novel, Dragon Academy, was released in June 2010, followed by Dancing in the Dark which she edited and contributed a short story, Dance Macabre, and Mounted Exercises in July 2010.  She edited another anthology, Flashes Through Time, out now in eBook format and slated for print release Fall 2010.  Diane also writes as Nya Rawlyns.  Her novella, Sculpting David, will appear under the Red Sage imprint.  Shadow of This World, written in collaboration with Denyse Bridger, Chris Ledbetter and Joann Hamann-Buchanan, will be released by XoXo Publishing.

Bill Kirton has been a university lecturer, presented TV programmes, written and performed songs and sketches at the Edinburgh Festival, and had many radio plays broadcast by the BBC and the Australian BC. He’s written three books on study and writing skills in Pearson’s ‘Brilliant’ series and his crime novels, Material Evidence, Rough Justice, The Darkness and the historical novel The Figurehead, set in Aberdeen in 1840, have been published in the UK and USA. His short stories have appeared in several anthologies and Love Hurts was chosen for the Mammoth Book of Best British Crime 2010.

Matthew wrote his first work of fiction at the age of 9 – a full 8 pages in length (with pictures) – and is currently languishing somewhere in his parents’ loft. He sincerely hopes the rest of his work doesn’t go the same way. He lives in the south-east of England and is searching for a publisher for his first, full-length novel, Fall From Grace, as well as writing his second one, currently untitled. He hasn’t got much time for anything else, as he feels like he is trying to live three lives already.

What Soooz says about herself: “I write books. Some people even think I know how the hell to do it.”

Jeremy C. Shipp is the Bram Stoker nominated author of Cursed, Vacation, and Sheep and Wolves. His shorter tales have appeared or are forthcoming in over 50 publications, the likes of Cemetery Dance, ChiZine, Withersin, Pseudopod, and Shroud Magazine. Jeremy enjoys living in Southern California in a moderately haunted Victorian farmhouse called Rose Cottage. He lives there with his wife, Lisa, a couple of pygmy tigers, and a legion of yard gnomes. The gnomes like him. The clowns living in his attic–not so much.

Is a caffeinated stay-at-home mom, artist, writer, composer and eccentric. Her debut novel Must Love Dragons is coming out through Hunt Press September 2010. She writes a column on obesity in America for Frum Forum ( http://www.frumforum.com/ )  and draws/writes webcomics for the company she co-created: Tangent Artists  (http://www.tangentartists.com/). Monica lives in the D.C. Metro area with her very supportive husband.

Sessha turned to writing full time two years ago after a twenty year stint in video production editing, scripting and creating motion graphics.  Her first novel Strength of Will was released in November 2009.  Her short story Wintersong is included in Dancing in the Dark: An Anthology of Erotica. Her latest offering, Shinobi, is currently out on query.

Jeff dabbles in novels, short stories, poetry, screenplays, plays, comic books, traditional and digital advertising copy. His current gigs include writing multiple on-going comic series and acting as creative director for Saint James Comics. For a day job, he’s a content strategist at Arc Worldwide, using the power of content to convince consumers to get in bed with products. Jeff currently lives in his own personal zoo in Des Plaines, Illinois with his wife, two children, dog and cat.