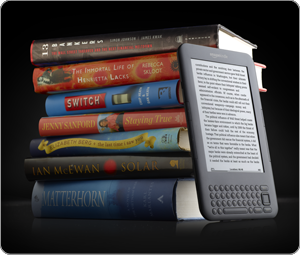 See, I’ve signed on with an Indie Publisher (PfoxChase). With Spirits of All Hallows Eve in final edits (before the Creative Director at Pfoxchase rips it to shreds ?) prior to an August release, and The Prodigal’s Foole about to go through final stages before it’s publication on Halloween 2011, I’ve got nothing but love for the Indie world.

My recent attendance at ReaderCON 22 this year did nothing but solidify my decision to go this route to get my writing out there for the world to see.

I think the why I’m going this route is an important discussion to have though, as well as some of the things to look out for.

This essay will be broken into three parts.  First I’ll chat a bit about the technology of today and how that impacts the “bricks and mortar” businesses of the traditional publishing houses.  Second, I’ll touch on self-publishing and modern tools such as CreateSpace do “do the deed” through to social media and marketing.  Lastly, the Indie presses.  Why finding one that fits what you want to accomplish is critical, what was important to me in an Indie, and things to avoid.

I’m a technology consultant—been in the IT business for nearly 30 years at this point.  This is important, because the entire publishing industry has been turned on its ear in the last few years and technology is one of the main reasons.

Not just because of the e-readers out there (which I’ll discuss in a moment).

Amazon and other large warehouse-type operations first changed how logistics is handled.  Bulk purchasing, distribution, ease of ordering and high services ratings along with low overhead created the first strain on the industry.  Margins were slashed.  An all out price war ensued.  This is the plus side to capitalism, and consumer costs come down.  It really is Economics 101.

The traditional publishing houses were, of course, watching.  But from their perspective, although financial models changed, it was business as usual with regard to talent acquisition.

Like the music industry when the iPod and MP3 players were released (and believe me the introduction of cloud-based services hasn’t made the financial models easier), introduction of the kindle, nook, and to some degree the iPad has allowed easier access to the written word digitally.  Now don’t get me wrong.  I LOVE the feel and smell of a book.  But with online book services such as Amazon and digital content companies such as Smashwords, the old bricks and mortar bookstores are in trouble (Borders is done, and B&N is not far behind).

And when I’m traveling, there is nothing like a library of 400 books on my Kindle to bring the weight of my bag down considerably.

What’s been fun to watch is how the industry itself is reacting to the technology.  Because they still have no real idea what to do with it.  Oh, there are many different formatting standards for digital books (ePub, MOBI, even PDF) but utilizing the technology is something no one has fully realized yet.

Let’s step back in time for a moment to see how we got here.

Writing on stone tablets became scrolls…the codex of ancient times, if you will.  But they were linear in progression, which was difficult to stop an start.  For example, let’s say you read a scroll 80% of the way through, then were called away to , say, build a pyramid or something.  When you returned, you’d have to find your place by unfurling 80% of the scroll again.

The Chinese were quite clever about their scrolls.  They included a progressive set of pages that could be unfurled leaving the reader with a slightly better way to access randomly where you were in a particular tome.

The book as it is today is a natural extension of this ancient technology.  It’s compact, broken into pages, perhaps has a Table of Contents and/or an index.  A much improved paper version of the scroll.  Believe it or not, your standard length novel of today developed for economic reasons—it was the most cost effective size to produce.

Now we have this digital medium for books.  We are currently in a transition phase to this new medium.  The economics are virtually the same for a short story and a massive tome, so what will be the driving force in the future?

My guess is that it will be time.  Time to produce work at get it out there for you and I to read.  I think you will slowly see the decline of the 100,000-word novel in favor of shorter works that hit the street faster to keep an author current.  These singles will act as standalone stories, or be published every few weeks/months in a serialized format.  It will all be about speed.

Along with this change will be the ‘smart book,’ an interactive literary experience that will not only tell a tale, but also include links and multimedia components to enhance the experience.  Maybe there will be an interactive map that will allow you to follow along with the main character’s travels and adventures.  Video of locations might be included or a song that a character sings might be imbedded.  For non-fiction digital books, the foot and endnotes might become hyperlinks for reference.

Not only will a writer need a good editor, but eventually a multimedia technologist might be needed.

But for now, for right now, the industry is unsure of the next steps.  Which is why the big publishing houses are watching the Indie publishers so carefully.  Indie’s can move and change business models much easier than a big conglomerate can.  And eventually someone is going to crack the technology model for this new digital book age.