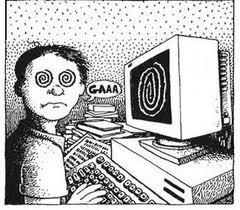 I am a casual writer. …Meaning, writing is not how I make my living and I do not follow any schedule for writing and publishing. I do not have a goal of one published work per month and NaNoWriMo may as well take place on another planet for me. I admire people who tackle it, but I would never get into it myself. I publish about one original short story every two-three months, and I think it’s been over a year since I did a full-size book.

The only thing I write on a regular basis is a food page for a friend’s monthly web-zine. …Just a little something with recipes, step-by-step instructions and photos for people who are reticent about cooking.

I hold a full-time job with a large corporation (yes, one of the evil ones that everyone knows about). I work from home, but my work week still amounts to 60 hours. The nature of my job is such that I have to utilize my brain non-stop – that’s analytics for you.

I am a rampant multi-tasker, but original writing is an exception. I usually don’t have anything else going on when I write. Fortunately, once I get an idea for a story, the rest of it forms in my head and I can carry it around until I have time to write it down. I am verbose, in the best tradition of my Russian ancestors, so one story usually equals one Saturday’s or Sunday’s worth of writing time.

In addition to my own casual writing, I also translate books. Casually. I specialize in less-known works of Russian literature. Somehow, having to think in two languages at the same time does not preclude me from facilitating a conference call or pulling together a forecast report. Perhaps, it is because I am not making anything up – I am just interpreting what someone else has already made up.

The same goes for graphic design. I do all of my own book covers as well as design them for other writers. I can have code running on one computer, while I am selecting images for a cover on the other one, or I can be on a call using speaker phone, with my hands free to crop, resize, recolor, overlay, and export.

Somehow somewhere all that casual writing, translation and cover design spilled into illustration work – both for my own books and translations, and for those by other authors. It is not uncommon for me to pop in a movie – something I like but have watched many times and don’t have to follow – and sketch at the coffee table in my living room while having dinner. … Glass of wine in one hand, pencil in the other, and off we go into the drawing land. One two-hour movie usually yields an illustration and a half.

Interestingly, even casual writing requires full-time levels of promotion. Hootsuite is my best friend and I use it to plug relentlessly to three Facebook pages, twitter and LinkedIn. I keep a spreadsheet with a pivot table that summarizes, what I promote, when, and through which channel. I spend 2-3 hours every week scheduling Hootsuite posts, sneaking them in between loads of laundry, walking the dogs, conference calls, making dinners and vacuuming. I do my best to vary the tag lines, promo frequency and grouping to make sure that people don’t get bored or just plain annoyed. Very surreptitiously (and casually, of course), I post on average 120 – 150 promo links a month, not counting specials (like freebies, discounts and new publications).

To keep my support base strong, I don’t just promote my own work, but also that of other writers I collaborate with. Let’s face it, an indie writer’s closest pal is still another indie writer. I tweet a review of someone’s book, followed by a link to one of my own – they tweet out both to their followers. Everyone is happy. I do a book review combined with the author’s interview on my blog – they return the favor by doing the same for me. And then we can both use these blog posts later by posting them during subsequent months as part of our own promotion.

There are little things, of course, like tagging, liking, rating and reviewing books on Amazon and Barnes & Noble. In addition to written reviews, I also do an occasional video review and post it on YouTube. People like those – they lend a bit more of a personal air to the review process. Of course, I don’t just record and post the videos. Each one gets edited and supplemented with cover images and a soundtrack. A five-minute video review takes up to two-three hours of work before it looks good enough to share with the world.

All writing needs editing – be it my own stuff or the translated stuff. Editing is hard work. I value it highly and, whenever possible, compensate people who edit my work in some shape or form. English being my second language, I outsource my editing to the native speakers. Most of my short stories are edited by my husband, which is fair, considering I help him run his business and do all the promotion work for another business that he and I run together. I also review his books and articles, when he needs a sanity check. For my longer works, I work with my fellow writers. We either settle on a price with a reasonable payment plan, or we barter. For example, a friend of mine currently has one of my translations in for editing, and I have volunteered to help her out with beta reading.

At the end of the day, even with infrequent and irregular publications of my own, there is always something going on that is a) related to writing and publishing, and b) requires time and effort. Perhaps casual writing is not all that casual after all.

Maria K. is the pen name of Maria Igorevna Kuroshchepova – a writer, translator, and blogger of Russian-Ukrainian decent. Maria came to the United States in 1994 as an impressionable 19-year old exchange student. She received her Bachelors and Masters degrees in engineering from Rochester Institute of Technology (Rochester, NY).

Maria covers a wide range of topics from travel and fashion to politics and social issues. Her science fiction and fantasy works include Limited Time for Tomato Soup, The SHIELD, The Elemental Tales and others.

A non-fiction and science fiction writer in her own right, Maria is also a prolific translator of less-known works of Russian and Soviet literature into English. Her most prominent translations include her grandfather Vasily Kuznetsov’s Siege of Leningrad journals titled The Ring of Nine, and Thais of Athens – a historic novel by Ivan Yefremov. Both works quickly made their way into the top 100 Kindle publications in their respective categories and continue attracting consistent interest and acclaim from readers.