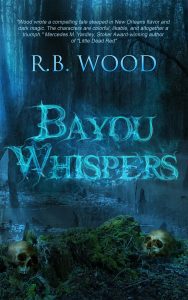 Bayou Whispers, the latest thriller from horror writer R.B. Wood is the story of no-nonsense New Orleans native, Jeannine LaRue, the sole survivor of her family after the devastation brought on by Hurricane Katrina. In the aftermath of the storm, she believed she’d been saved, but soon found herself held hostage and sexually exploited, rescued months later by sheriff’s deputy Curtis Jones.

Twelve years after Katrina, Jeannine is a new attorney who returns to New Orleans to save her old friend Curtis Jones-now a local thief and trafficker of stolen goods-after he is arrested for the murder of Jeannine’s captors, whose bodies have recently been found. But Jeannine discovers more than she bargained for when she uncovers a family history of dark voodoo magic and an unholy alliance with an ancient evil Haitian god.

“Bayou Whispers is a sublime cocktail of horror, supernatural thriller, and urban fantasy, where the mythos of voodoo clashes with the modern day.”—Todd Keisling, author of Devil’s Creek

Take a Deep Breath and Dive Beneath the Surface of Shallow Waters—Where Nothing Stays Buried.

With 20 Dark Fiction & Horror tales diving beneath the surface of life, death, and the mystery that lies beneath.

A boy follows his girlfriend’s suicide note to its disturbing conclusion.

A man must pass on an ancient curse of immortality before his time finally runs out.

Two lost beings fight for life, for each other, and to find a way home.

A serial killer from the future, banished to the present day, must control her homicidal urges in order to survive.

A thief and a sex worker find their paths unexpectedly entwined in ways that threaten both of their lives.

For a caged girl, one hand gives, but the other takes away all she’s ever known.

To gain their freedom, quarreling townsfolk must find a way to cross a bottomless ravine.

A man interrupts a monster at work and is determined to entertain the creature long enough to stay alive.

When his father’s ghost appears, a businessman is forced to reflect on his life.

~ Sacrifice Season ~
Notorious serial killers, the Spawraths, are in prison, yet a killing has happened at the Spawrath home and this time it is their youngest daughter who is the victim.
When the shreds of the truth surface, Hannah, Matthew, and Ethan all realize their parts in an old religion with old practices.

The Glass Bauble
When a young man’s fiancée goes missing in New England, his search leads him on a
path filled with nightmares and delusions.

Eggnog, Tinsel, and Terror.
Christmas eve: A night of last minute shoppers, cops hoping for a quiet shift, and a serial killer in the middle of his latest victim.

The Scribe
It’s Christmas Eve and Christopher, an old scribe residing in an abandoned hermitage, is translating a mysterious scroll thought to be related to the birth of Christ. As candlelight flickers, he transcribes the story of Pelznickle; the words that will unleash the wrath of the real Kris Kringle.

The Ghost of Christmas past
Santa’s not the only one visiting this home for Christmas. An unfaithful husband finds himself being tormented by a spirit that knows his secret. In the sleepy little town on Higglesworth the ghost of a Christmas past will deliver a very deadly present.

Unjoyful Noise
On this holiday season, the songs in the air brings forth death everywhere.

Step into our twisted minds for six horrifying tales.

All her life, Challis has been bullied by the people around her, and now the thin string holding her sanity intact has snapped…The only thing she sees is crimson. They say revenge is best served cold, but Challis will take hers: hot, sticky and red! Come along for one horrific ride as author J.L.Clayton takes a forsaken girl and turns her into a heartless killer. Seeing Red has never looked so frightening.

Author R. L. Weeks brings you Twisted Insanity. It cannot be reasoned with. It cannot be bargained with. Jacob has been locked up for ten years, waiting for his chance to take his revenge on Gale, his ex-wife. After persuading the mental health team that he has recovered, he goes on a killing stint. Gale is about to find out the extent of his twisted insanity.

Truth or Dare, by K.L. Humphreys

Taken to a psychotic man’s playground, Becca only hopes her husband can get help to save her, before she ends up like the others.The Missing Persons Unit team know that unless they stop a madman and find missing Becca, they will be finding body parts in the forest. Author KL Humphreys will have you looking over your shoulder wondering what is really going on in the minds of those you call family.

A walk through the Hell House leaves Erin questioning if visiting the Carnival of Darkness was a good idea after all. The sounds pouring from the mouths of the actors in each room were just a little too good.A little too…real. Step into a world of unthinkable torture as author Becca Moree takes one innocent college student on a Halloween outing she will never forget.

Upset the author at your own peril.
A young down-on-his-luck author makes a demonic deal to remove a few obstacles from his writing career and stardom.

Jen’s best friend, Jess, is an emotional train wreck. Too weak and afraid of her abusive father and now forced to marry a man she doesn’t love, Jess’ life is spiraling out of control. Jen desperately wants to help her friend but… What’s a doll to do?
Steve Evans brings a wickedly sweet twist to a tale of friendship in “White Wedding: Reckoning”.

A man can run from his past … but not his future.

Symon Bryson lives in self-imposed exile until Monsignor DuBarry goes missing and not even the most adept of the magic practitioners can determine the reason for the abduction. The clues lie buried in the past amidst epic battles and horrific losses but reliving that failed mission uncovers fresh challenges and fearsome threats that reunite his old team. Symon must deal with his own hidden demons and confront the menace that threatens the delicate balance of power. When the darkest of all evils lures Symon into springing a long-planned trap, an unsuspecting world will confront the unthinkable.

When all that stands between Heaven and Hell is magic, more than faith will be tested.

“It started with the bang (the first line is absolutely gripping) and ended with fireworks!”
–Mercedes M. Yardley, Shock Totem Magazine

“R. B. Wood has filled every inch of his vast canvas with gripping reverses of fortune and a narrative that blends the most disparate elements with great skill and verve.”
–Bill Kirton, author of the Jack Carston Series

Tales of Magic and Misery features 19 short stories spanning Tim’s career and includes stories in the Demon Squad world plus early works of horror and dark fantasy. Also included are several rare stories as well as one unreleased and a two-chapter sneak preview of the forthcoming Tales of the Prodigy novel and the first chapter of Clandestine Daze, Eyes Deep.

Get swept off your feet by an Internet romance

Escape from a war-torn encampment with a mystical healer/princess

ORANGE KAREN: TRIBUTE TO A WARRIOR is a collection of 39 stories that explore the strength and resilience of the human spirit. From the monster in the basement to the teddy bear on a young woman’s pillow, each story uses the colour orange as a thematic element, revealing the power of love, friendship, and the will to live.

Karen DeLabar is a friend, author, and mother. In June of 2012, she was stricken with Toxic Shock Syndrome.

One hundred percent of the proceeds from the anthology will be donated to Karen and her family, to assist with her medical expenses, and ongoing recovery.

Follow Karen’s story at karendelabar.com, and learn more about the symptoms, effects, and treatment of Toxic Shock Syndrome at toxicshock.com